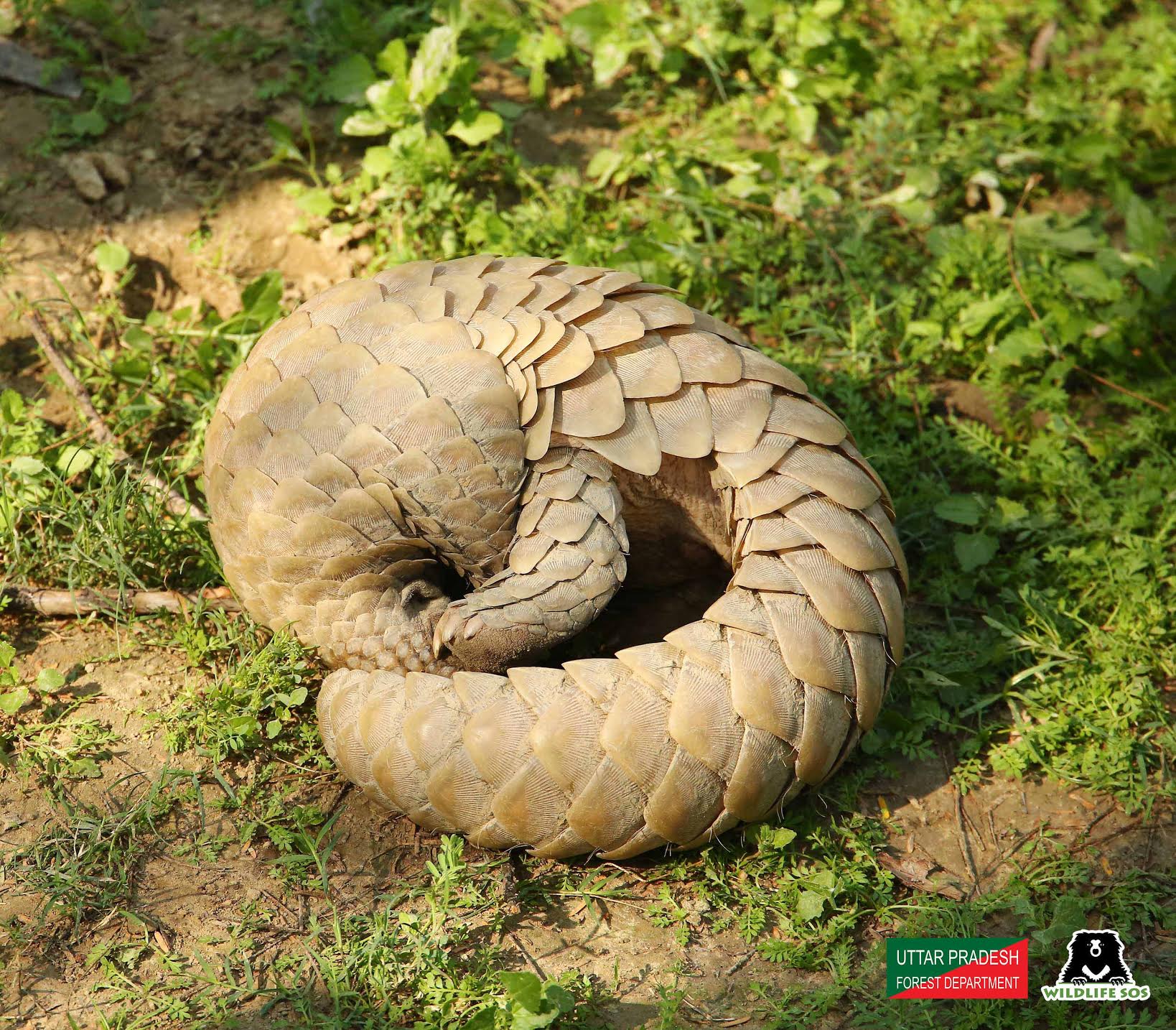 The residents of a village in Agra, Uttar Pradesh, were in for an unexpected surprise when they spotted an odd-looking scaly animal in the middle of an open field. They immediately informed the Uttar Pradesh Forest Department who reached the location along with a team from wildlife conservation NGO—Wildlife SOS.

Upon closer investigation, the animal was identified as an Indian Pangolin – infamous as the world’s most trafficked animal! 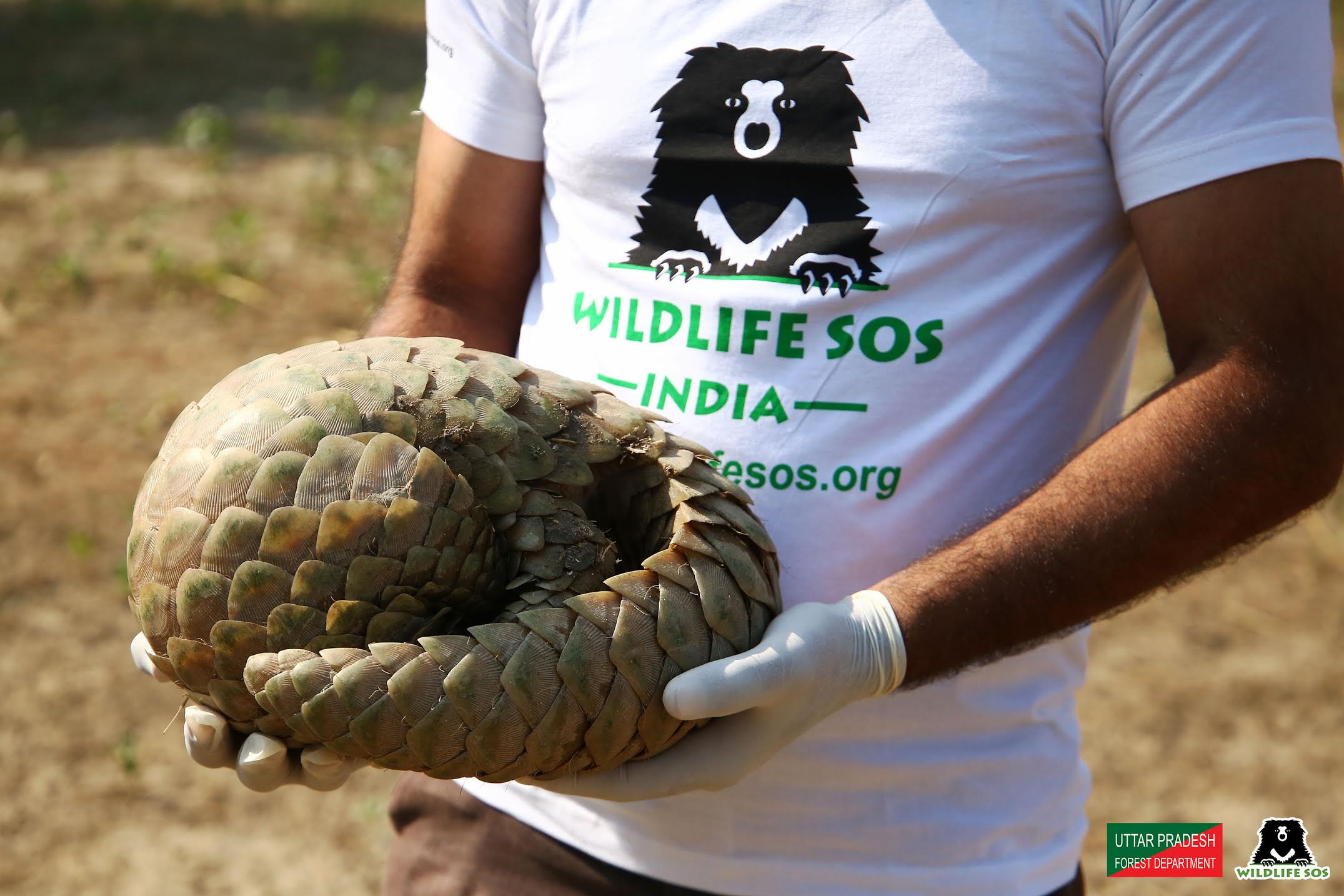 The pangolin lay curled up in a ball; this is a defence mechanism used when they feel threatened. Their body is entirely covered in scales (made up of keratin), that act as armour for their face and abdomen. Pangolins, also known as ‘scaly anteaters’, are the only mammals to be completely covered in scales. Their distinct features include long powerful claws that they can dig holes with, a long sticky tongue, that may be longer than their entire bodies at times, and of course the overlapping scales that cover their entire body.

As the small animal was lying completely vulnerable to external threats like predators and poachers, the team from Wildlife SOS carefully transferred the pangolin to their transit facility. 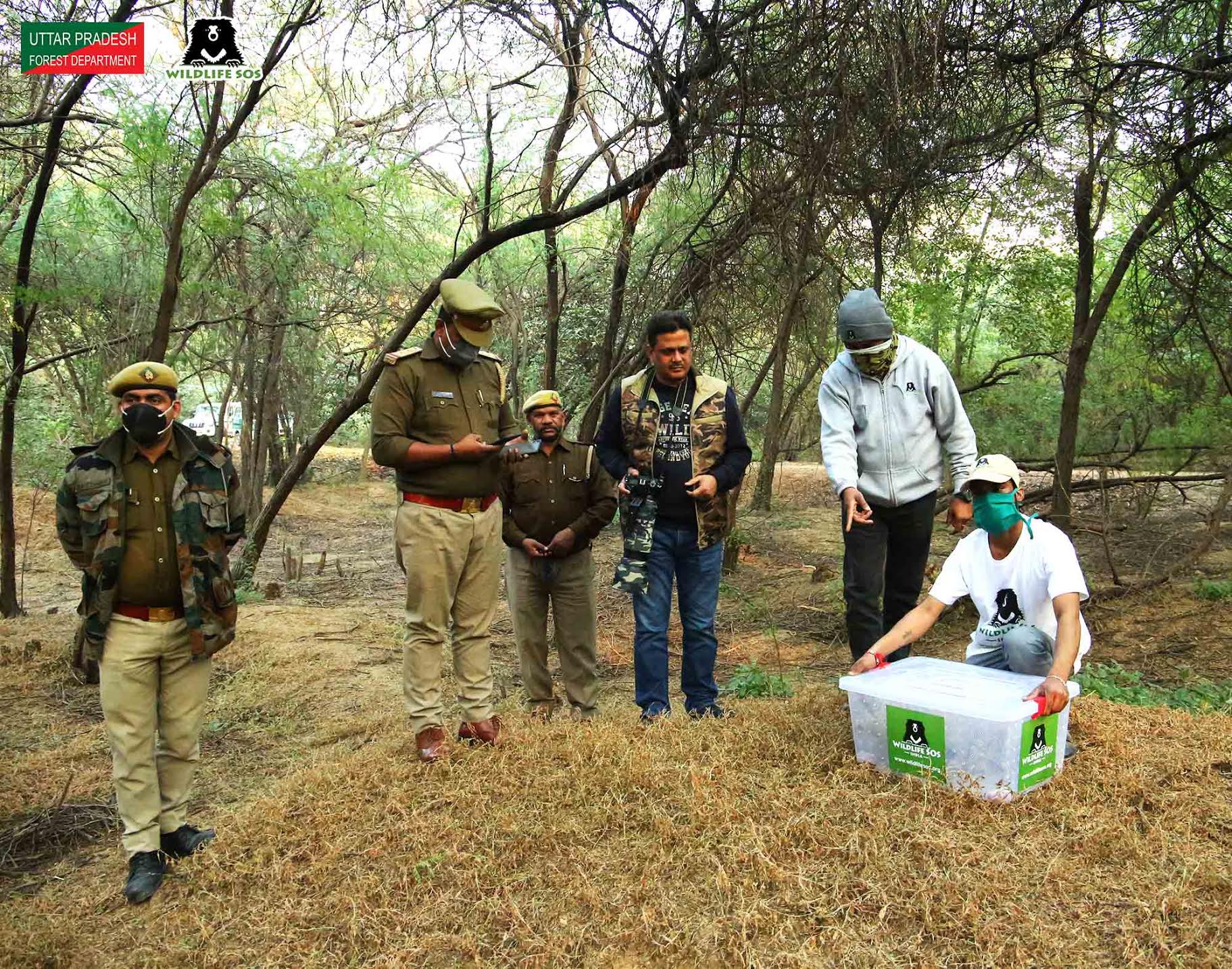 The Wildlife SOS team and the Forest Department also used the opportunity to educate the local residents about the pangolin species, their importance in the ecosystem and what to do if they come across a pangolin again.

The presence of the Indian Pangolin in the area proves to be a positive sign indicating rich biodiversity. In fact, the Indian Pangolin is known to inhabit the wetland ecosystem of the Sur Sarovar Bird Sanctuary which is located a few kilometres from where the pangolin was found. 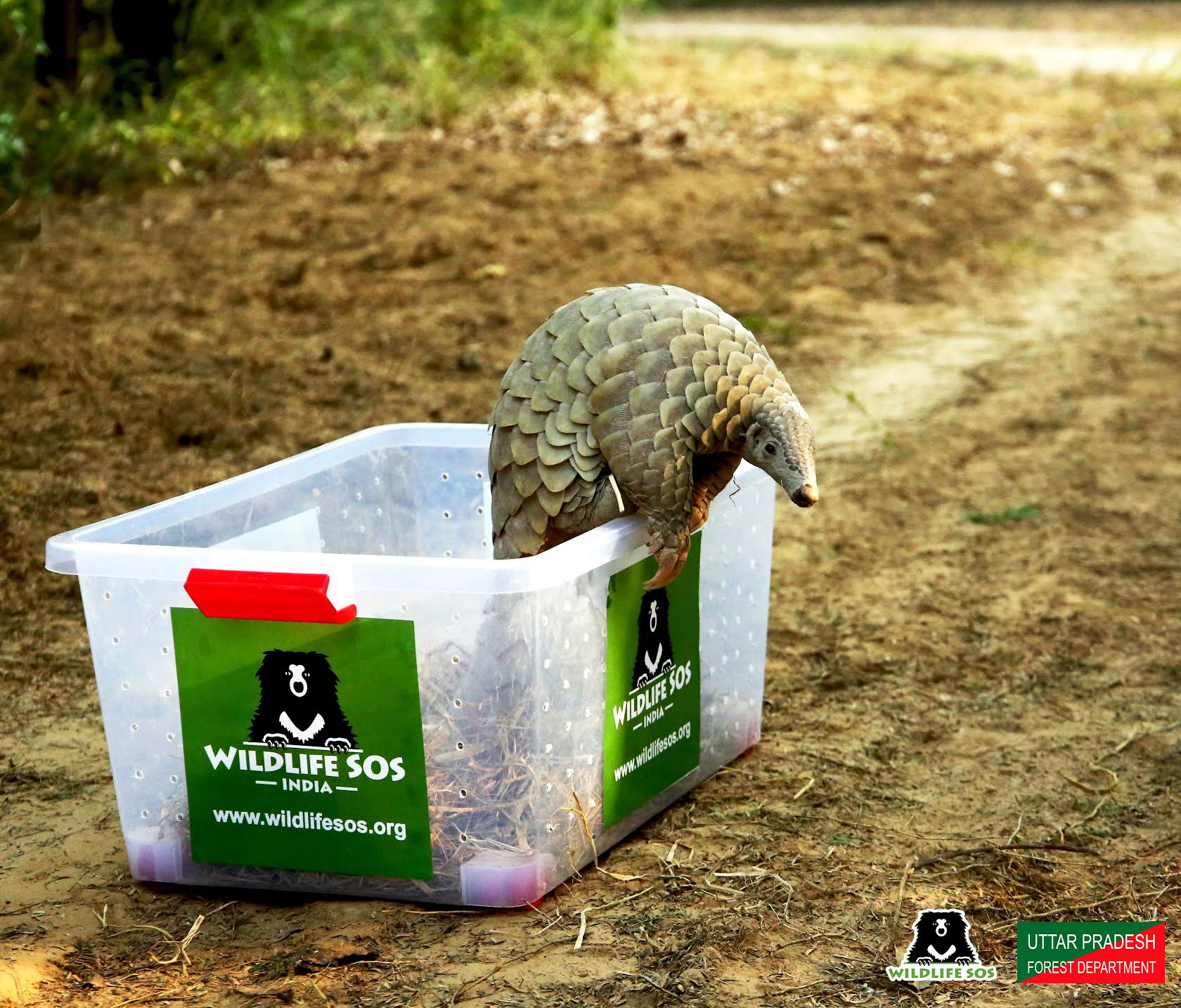 After a few days of medical observation, the pangolin was released back into its natural habitat, away from human habitation and under the supervision of the Uttar Pradesh Forest Department. The small animal took measured steps out of the safe-box and was quick to find a tree to catch a quick afternoon snack before disappearing into the thickets of the forest! 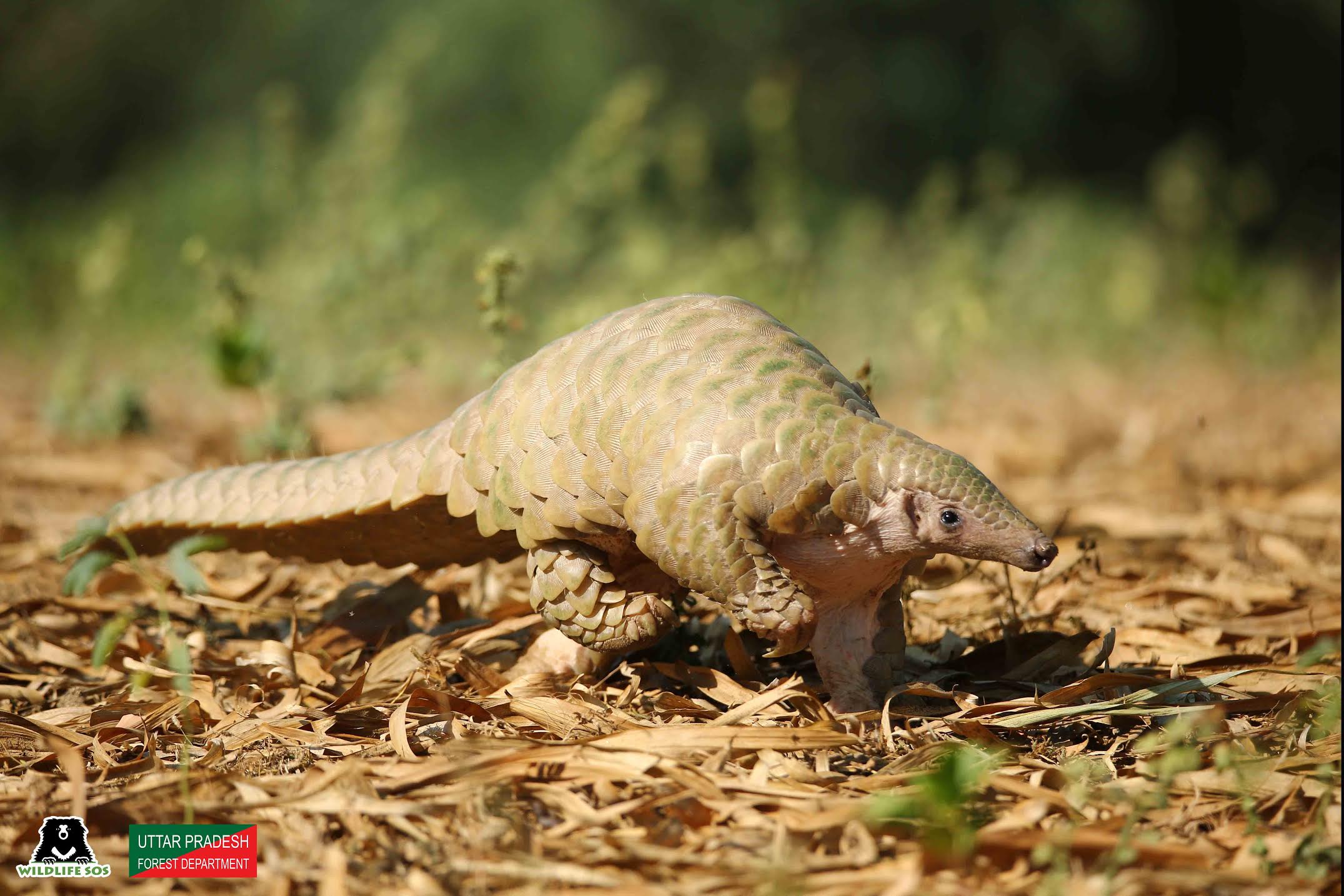 Pangolins are anteaters and play an important role in balancing the forest ecosystem by feeding on ants and termites. India is home to two pangolin species – The Indian pangolin (Manis crassicaudata) and the Chinese pangolin (Manis pentadactyla); both these species find themselves in an increasingly disadvantageous position. The harmless-looking pangolin is poached for its scales and is believed to have medicinal qualities in the South Asian culture, making it the target for being ruthlessly killed and brutally de-scaled to fuel illegal wildlife trade.

What Can You Do

The Wildlife Protection Act 1972 enlists the Indian Pangolin under Schedule I of the Act, thus granting it the same protection as the Asian elephant and the tiger! Despite the pangolin being highly protected under Indian law (Wildlife Protection Act 1972) and under the Convention on International Trade in Endangered Species of Wild Flora and Fauna (CITES), it continues to be illegally hunted and traded for its meat, a south-east Asian delicacy and its scales, blood and other body parts are used for traditional Chinese medicine. Local trade of pangolin meat and scales have also been reported in the states of Andhra Pradesh, Kerala, Tamil Nadu, Orissa, Manipur, Tripura, Assam, Nagaland and West Bengal. Large consignments of pangolins and pangolin scales are seized at national and international borders by enforcement authorities, annually.

According to Wildlife SOS co-founder, Kartick Satyanarayan, most people don’t even know that pangolins exist and that they are being pushed towards extinction at an alarming rate. As a result, creating awareness and protection of this species is crucial to ensure their survival today!