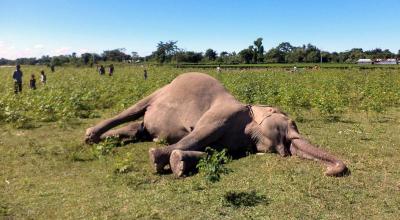 There is outrage around the world for the pregnant elephant in India who died after eating a pineapple filled with an explosive. There are conflicting reports on whether she was fed the pineapple on purpose or she came upon the trap. These types of traps are sometimes used in Kerala, India to protect their fields against wild boars. However, some people believe that it was done on purpose because “elephants raid crops intended for humans.” Either way, this is a devastating tragedy.

Forest officer Mohan Krishnan says that the animal had trusted everyone. He wrote: “She didn’t hurt even a human being in the village search for food… When I see her she is standing face down… thin and tired.”

The #Kerala Forest department has launched a 'manhunt' for those responsible for the death of a 15-year-old pregnant wild elephant, said an official. The elephant had died after being seriously injured by firecrackers hidden in a #pineapple.

The explosion caused injuries in her mouth and lower jaw. She was unable to eat. She died a few days later standing in the river. Forest officials say she died “the land where she grew up and played.” It’s absolutely heart-breaking.

Sangita Iyer says: “I can’t imagine what must’ve gone through her mind. Surely, she must be thinking about her baby. What had she done to deserve this? A ruthless murder of an innocent animal!”

Whether this was done on purpose or not will hopefully be discovered after the ongoing investigation into her death.

Sign this petition to join the nearly 500,000 outraged people demanding justice for this precious elephant who deserved better.