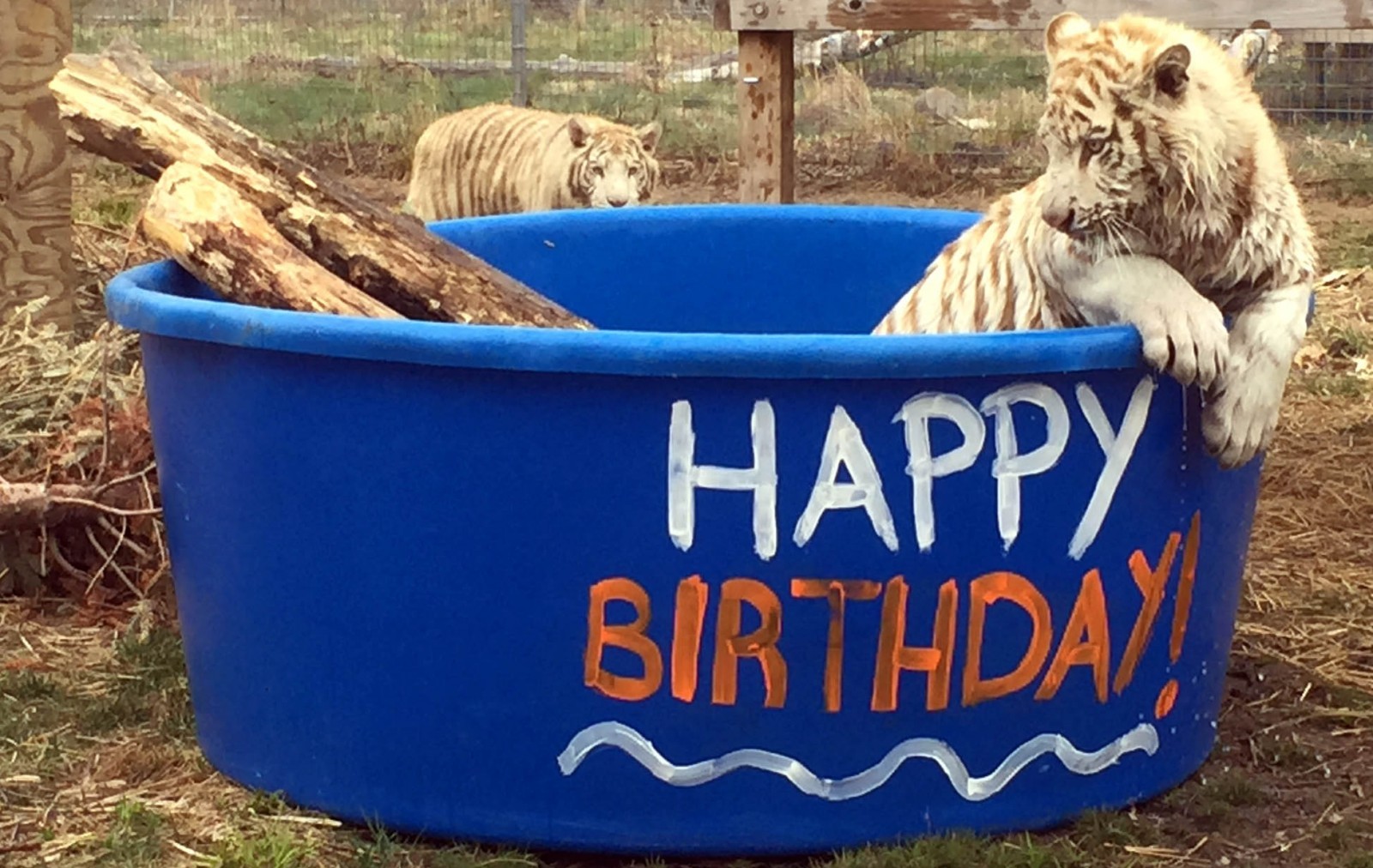 Jeremy and Simon are white tiger brothers who live at the Wildcat Sanctuary in Minnesota. They were transferred to the sanctuary, which is not open to the public, from a zoo around six months ago. This created new challenges for the staff at Wildcat, given that they had never cared for a pair of highly energetic cubs before and were more used to rescuing older big cats who were no longer deemed “useful” to the industries which previously used them.

But the amazing staff at the sanctuary happily took on the challenge and is now pulling out all the stops to celebrate Jeremy and Simon’s first birthday; using the day not only to lavish attention and extra special care on the young animals, but also to raise awareness about the truth behind white tigers in zoos and other animal businesses around the world. 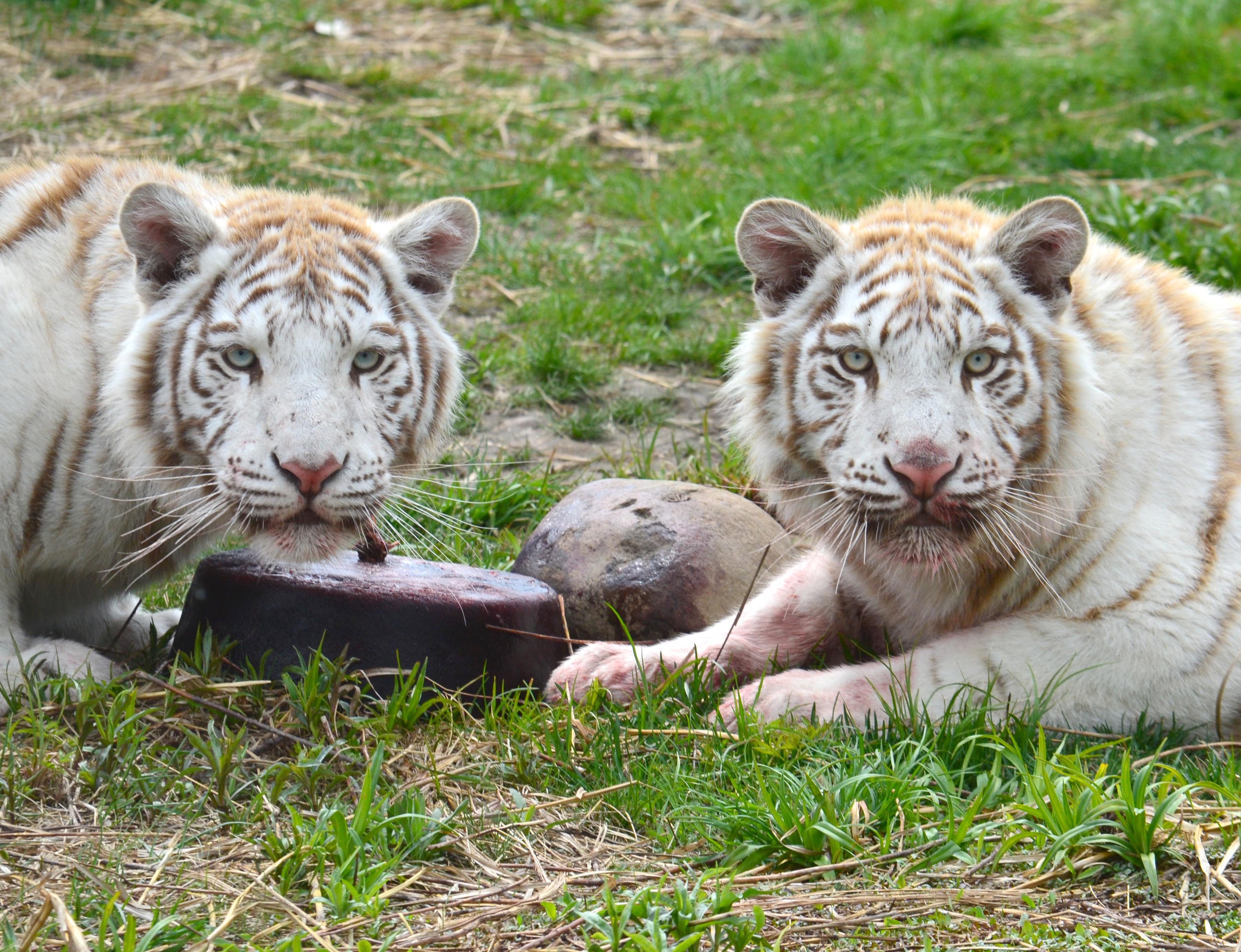 Rescued big cats, like Jeremy and Simon, need a full and consistent program of environmental enrichment in order to ensure that, despite living in captivity, they are given the absolute best life possible.

The sanctuary has been awarded the sought-after GFAS accreditation, showing that it meets the highest standards of care for rescued animals but, for birthdays, the already high standards are pushed even further. Birthday fun for the pair will include play-fighting in their pool, chomping on watermelon, chowing down on specially-made popsicles and generally getting up to mischief.

The sanctuary has released a video of the rambunctious brothers getting an early taster of what today’s celebrations will look like and it seems as if they are loving every minute!

Despite their obvious love for the tiger siblings, the staff at the sanctuary are convinced of one thing: Jeremy and Simon should never have been born. While the birthday celebrations are a way of marking an important milestone for Jeremy and Simon, it is also an opportunity to spread a vital welfare message that many people are simply unaware of.

White tigers are, by definition, inbred. Their unusual colouring is caused by the deliberate inbreeding of two animals with a condition called leucism, which is caused by a genetic defect. The continued inbreeding of these animals is known to cause long-term health problems for the individuals involved. These problems can include cleft palates, scoliosis of the spine, mental impairments, cross eyes and shortened life expectancy. Despite this, zoos, circuses and other establishments continue to breed them for the simple reason that they are popular with visitors.

Thankfully, Jeremy and Simon are showing no signs at this stage of ill health but the sanctuary vets remain vigilant. Julie Hanan from the Wildcat Sanctuary explained to One Green Planet, “They underwent extensive intake exams before arriving and everything appeared normal. Our veterinary staff will continue to watch over them closely. We know that white tigers, generally speaking, do have a shorter life expectancy.” 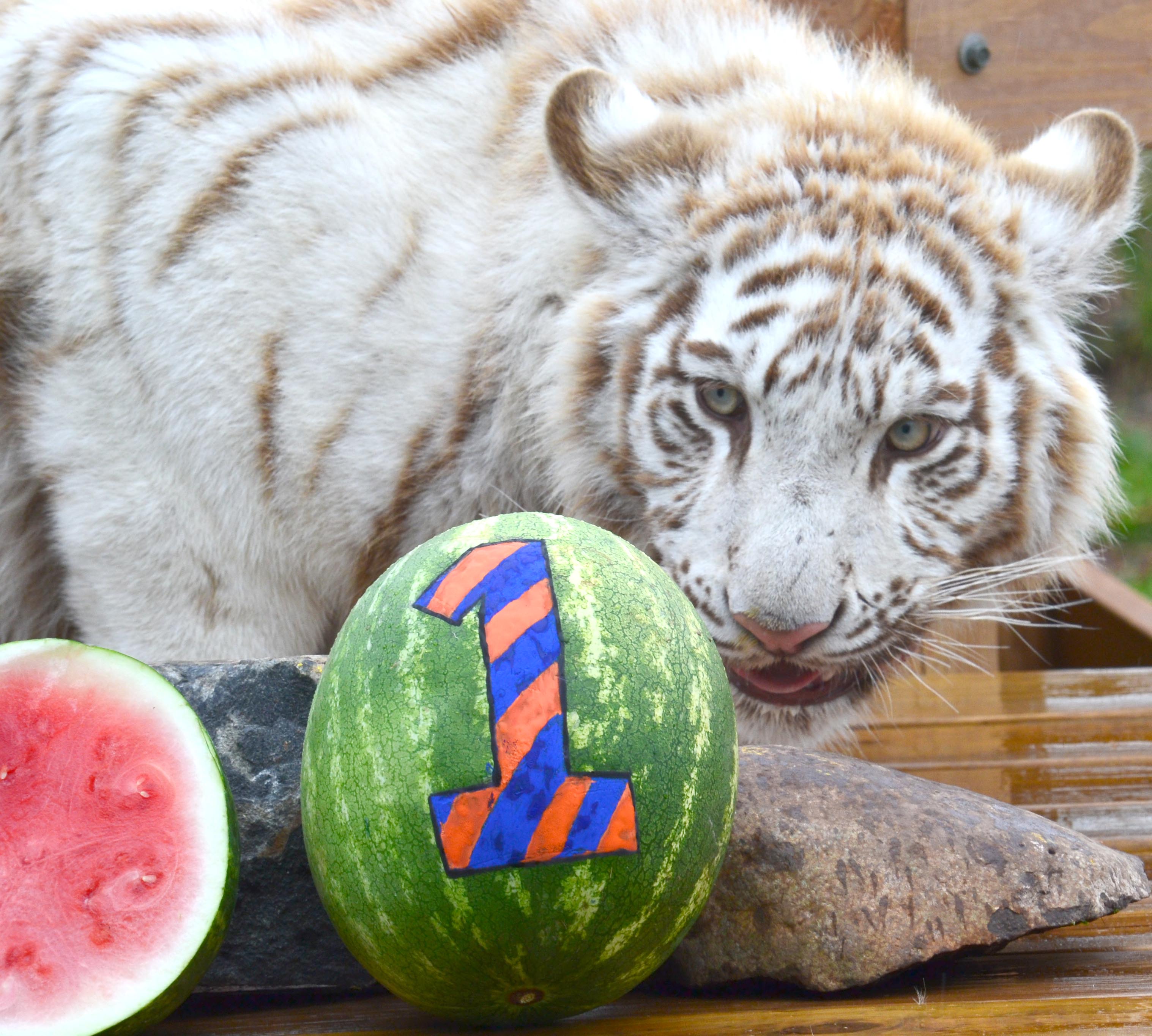 Glimmers of Hope for an End to the Cruel Inbreeding

Jeremy and Simon also represent a glimmer of hope that the end of the cruel inbreeding of these animals is nigh. Julie says:

“Simon and Jeremy came to us when a city zoo made the ethical decision to stop breeding white tigers. They decided it was time to put the animals’ welfare first and placed Jeremy and Simon with us in order to end the cycle of breeding.” 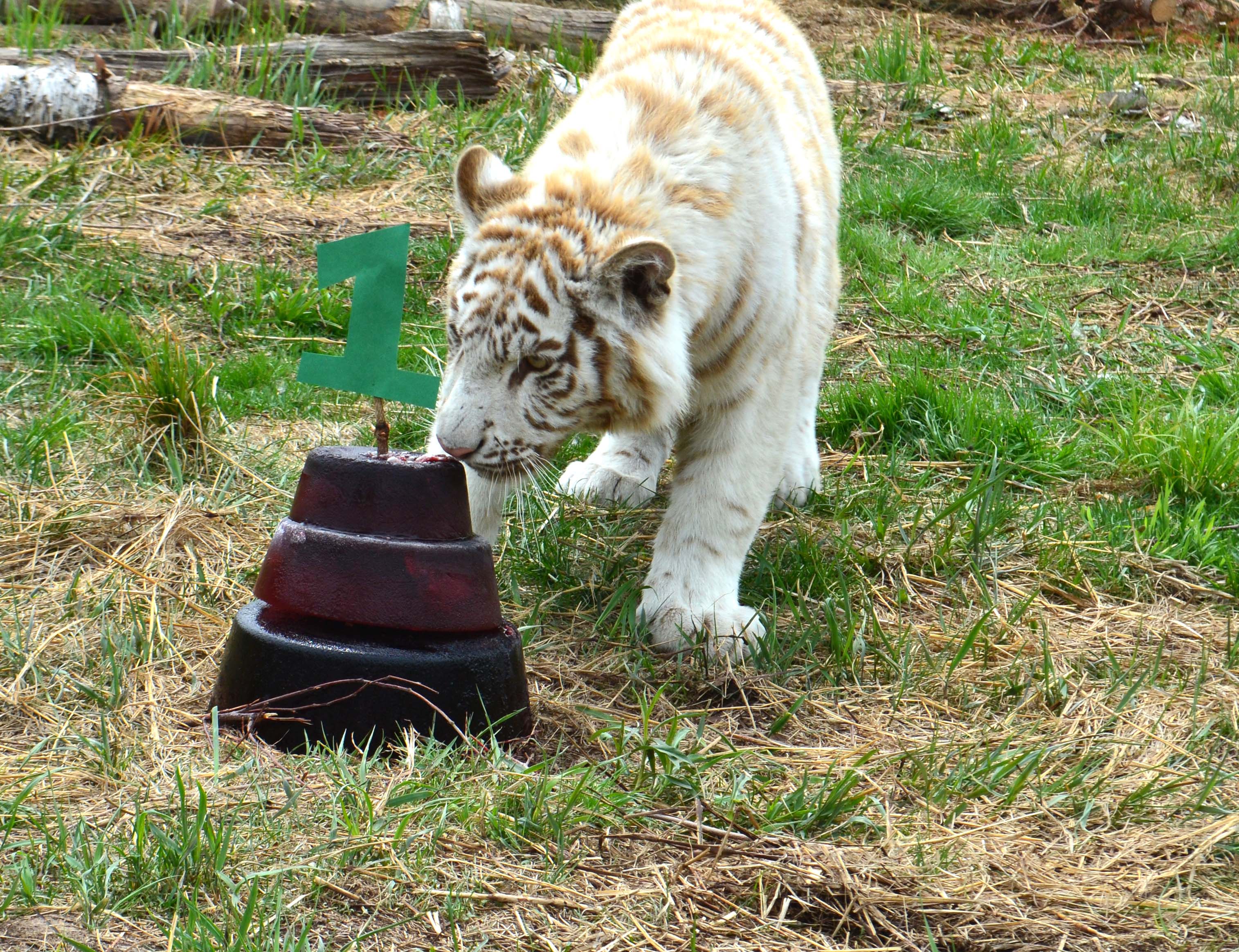 Not only this, but every time a picture, video or update about the two growing big cats is published, it sparks interest and discussion surrounding the issue.

“We want Simon and Jeremy to become the poster cubs for education about the truth behind the breeding of white tigers,” Julie explained, “We’ve already seen that their story has changed the minds of hundreds of our own followers.  The most common response we hear is: ‘I never knew.’  We hope that One Green Planet readers learn and share the knowledge forward. We challenge them to help Simon and Jeremy teach others why seeing a white tiger isn’t really the ‘wonderful’ experience they always thought it would be.”

Here at One Green Planet, we would like to wish the boys a very happy first birthday. We hope that you will join us in supporting the awareness-raising work of the Wildcat Sanctuary by spreading the word about white tigers. Beautiful, they may be, but the deliberate inbreeding of these majestic animals must stop.

Find out more about Jeremy, Simon and the sanctuary’s work by visiting their Facebook page or website.