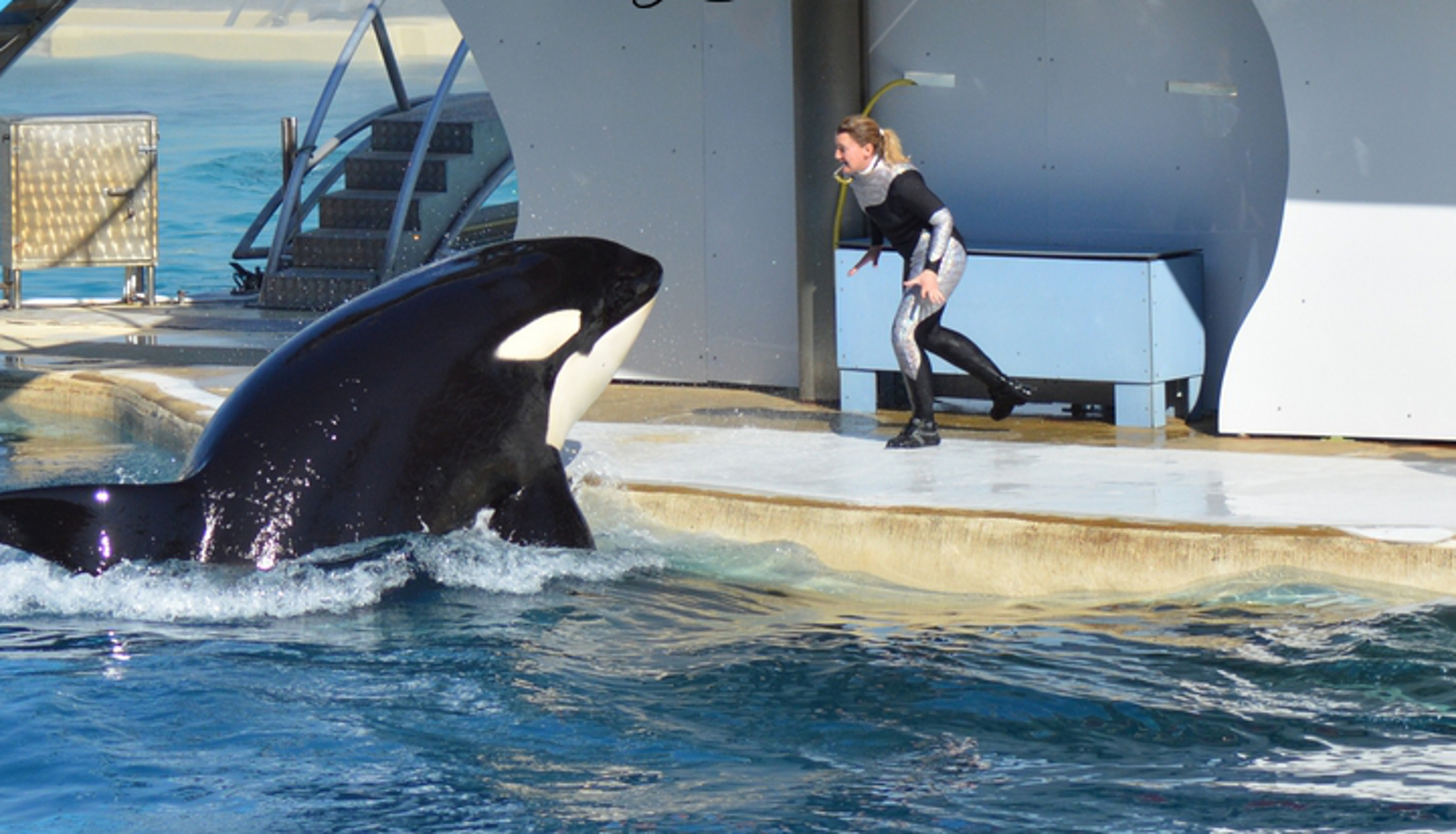 Deadly storms swept through the southern coast of France during the first week of October, causing severe flooding and extensive damage at Marineland Antibes, the largest marine park in all of Europe. Initial reports from witnesses claimed animals had escaped from their tanks, many were found dead, and that most of the orca tanks were inundated with mud and debris. Manager of Marineland, Bernard Giampaolo, assured the public that “our killer whales are not dying on the parking lot” and that the “situation with the animals was beginning to stabilize.”

Pictures, however, portrayed a heartbreaking and grave scene; all but 90 percent of Marineland was completely devastated. 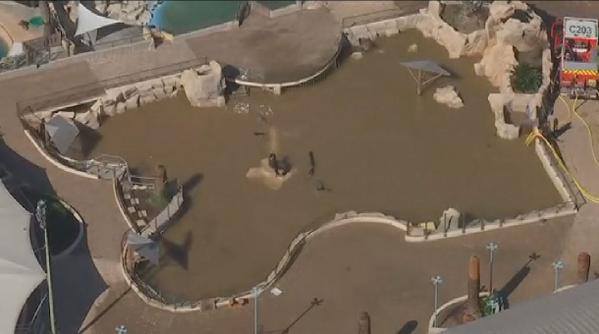 In the days following the flooding, the parks oxygenation and filtration systems were overwhelmed, causing water quality to plummet as mud and debris began to infiltrate the system. Although they attempted to maintain that the animals were all healthy despite the state of the park, on October 12th, Marineland confirmed a report that 19-year-old male orca named Valentin had died. The park has not yet released a cause of death, though the flooding is thought to have played a pivotal, if not the singular, role in it.

Like many other captive orcas, Valentin did not survive into his adult years. The circumstances surrounding his death might have been extreme and unusual given the occurrence of the flood; however, looking back at his life in captivity as well as that of his parents, it seems that his story is not an anomaly but rather all too similar to that of many – if not all – captive orcas.

In 1982, two one-year-old orcas, Kim2 (a male) and Freya (a female), were captured from Icelandic waters and shipped to Marineland Antibes.  Taken from the wild, and their families, when they were just a year old these orcas spent the greater part of their lives in captivity performing for the public in a concrete tank.

Freya and Kim2 were bred repeatedly during their time at Marineland, but of Freya’s five pregnancies, only one of her calves was not stillborn –they named this calf Valentin. 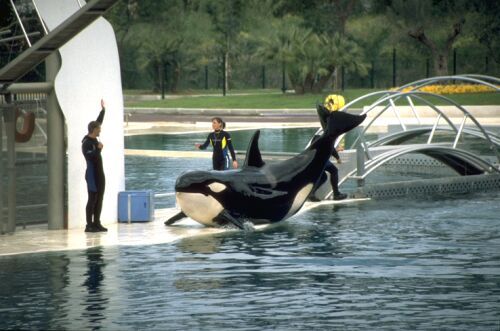 Valentin’s father, Kim 2, died from pneumonia in 2005 at just 23-years-old. Freya, Valentin’s mother, was known for being a headstrong matriarch and would often refuse to perform, leading the other whales to refuse as well. Freya was suffered from depression during her time in captivity and was given medication to “ease” her suffering. She died in the summer of 2015 at Marineland of an alleged heart attack.

Neither of Valentin’s parents lived to be anywhere close to the life expectancy for wild orcas, which can range from 40-90 years old. Sadly, the same fate was destined for Valentin.

Life at Marineland for Valentin 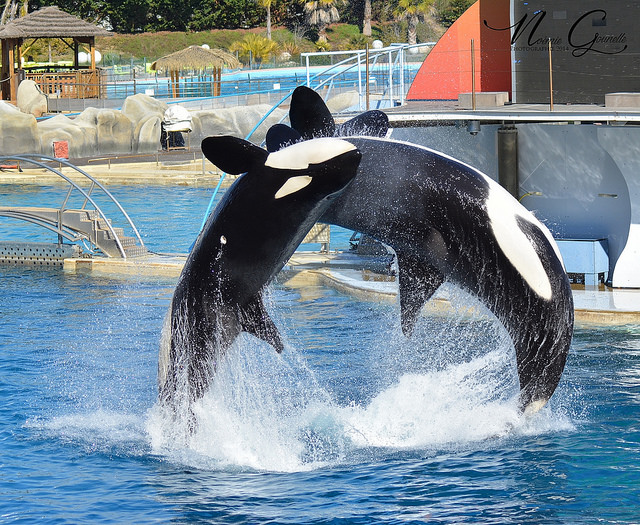 Valentin was considered one of the more gentle and mild-mannered orcas, favored by his former trainer, John Hargrove. He had the opportunity to grow up alongside his mother Freya, a natural progression in the life of wild orcas but something captive orcas rarely get to experience. Yet, despite the bond he shared with his mother and his pleasant disposition, Valentin still suffered from the tell-tale physical and mental ramifications of captivity.

At the young age of 19 Valentin’s dorsal fin was beginning to collapse, an occurrence that is thought to be associated with limited space to swim, along with a diet comprised primarily of frozen fish. Additionally, he displayed stereotypical symptoms of stress such as chewing on the bars and banging his head on the walls of his tank.

Valentin also began to exhibit signs of aggression. In an interview with The Dodo, John Hargrove stated that he would give Valentin drugs, “to suppress his testosterone levels when we swam with him because management was so fearful of an aggression by a sexually mature male.” Like Tilikum at SeaWorld Orlando, semen samples were routinely taken from Valentin, in spite of his aggressive tendencies and the stereotypic behaviors he displayed in captivity.

Marineland has yet to release the official cause of death for Valentin, but the fact that he, along with four other orcas, was left to languish in dirty and polluted flood waters for days on end seems to have played a major role in his passing. The facility already had a history of flooding and their lack of quick and pointed response to remedy the situation does not bode well for the future of the animals Valentin leaves behind.

What Can We Learn From This Tragedy?

The truth is, most marine facilities have not succeeded in raising or fostering healthy, stable animals, begging the question of why breeding in captivity is allowed to continue. Although the flooding that took place at Marineland is out of the ordinary, it’s obvious the facility wasn’t prepared or equipped to deal with an emergency to such a degree; still, marine mammal parks continue to insist they provide the highest quality of care possible. Since the 1960s, 151 orca whales have been captured from the wild for captivity. Of these 151, 127 are now dead – most of which died prematurely. Over 30 calves have been miscarried or stillborn in captivity, and countless instances of mental and physical distress have been observed in the captive orca population. Does this really seem like a healthy, thriving industry?

SeaWorld, the largest and most well known and of all marine mammal parks, was conveniently absent when the news of Freya broke, and interestingly enough, have yet to comment on this heartbreaking news both of the flooding and of the death of Valentin.

Though marine parks all over the world have remained relatively the same in the past decade, we have made great strides in our understanding of these complex and sentient beings. With that knowledge, we’ve also begun to understand how damaging captivity is to their well being. It’s time we begin to look towards the future and do what is in the best interest of the animals being held in captivity, and in this case like many, that is to retire them and move them to sanctuaries.

We can all play a pivotal part to ensure that this becomes a reality for orcas by sharing this article and helping to raise awareness for the animals suffering in captivity. Marine parks are funded by consumers who buy tickets to see these animals perform. By boycotting marine parks and all animal attractions that profit off of the exploitation of animals, we can cut the funding needed to continue this abuse. No animal should suffer for the sake of our entertainment. Once the marine captivity industry realizes this and puts an end to their practices, then, perhaps, the death of Valentin will not be in vain.