A Guide to Mushrooms Foraging for Beginners 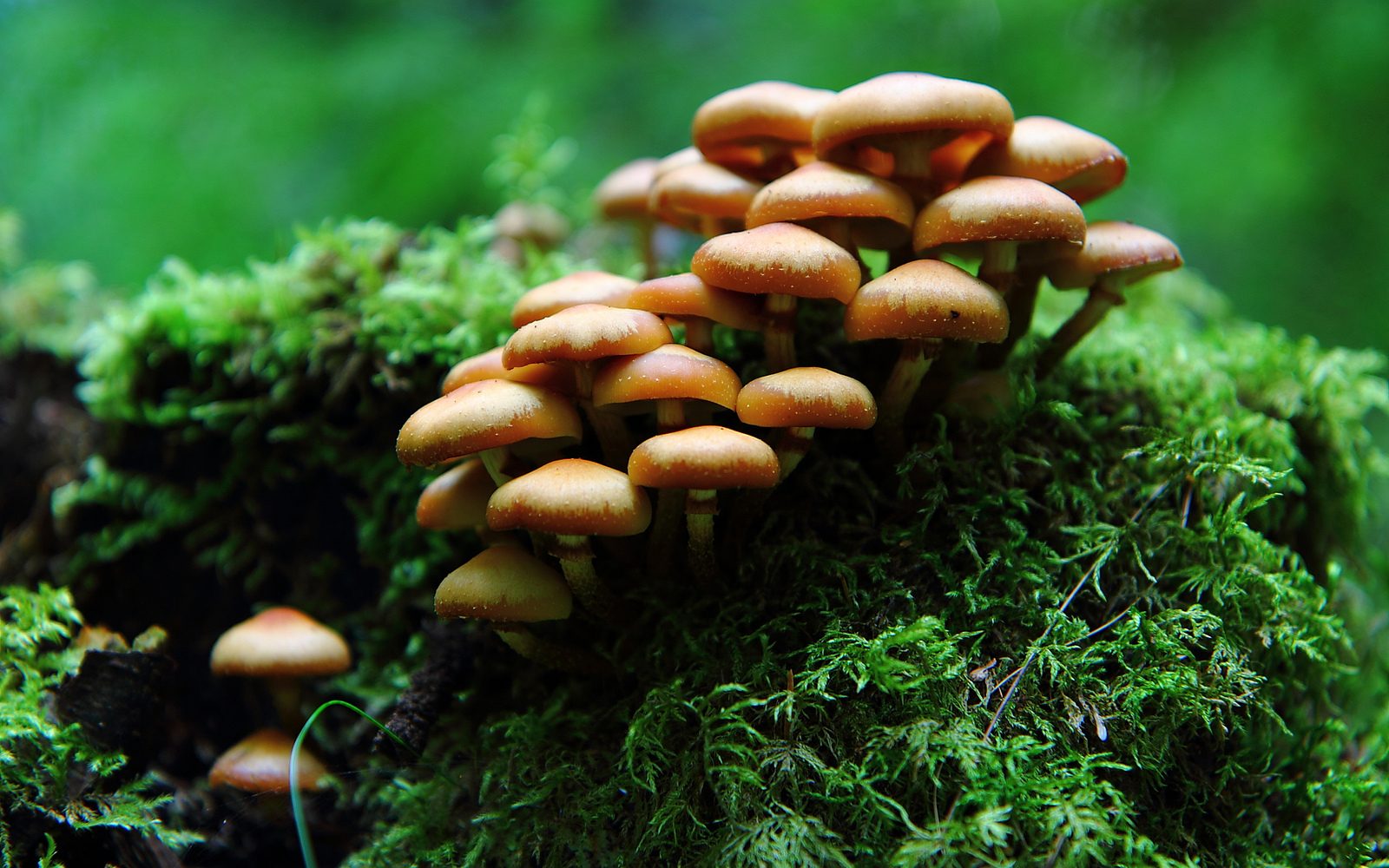 Ah, mushrooms. Whether you really love them (or secretly just love to hate them) if you ask us, they’re really, truly amazing. Not only do mushrooms make great substitutes for meat in hearty dishes (Mushroom Stroganoff or Portobello Mushroom Steaks anyone?), but a good Cream of Mushroom Soup on a cool fall day is nothing short of spectacular.

And that’s not to mention all the non-culinary benefits of mushrooms! Mushrooms are a good source of B vitamins, amino acids, fatty acids, and they also contain many beneficial antioxidants. Not only that, but edible fungi have been reported to have antibacterial, antiviral, antiparasitic, anticancer, cardioprotective and cholesterol lowering health promoting properties. As such, including them in your diet can protect you from cancers and many chronic diseases. If that’s not food for thought for mushroom-haters, we don’t know what is!

Did you know that there are more than 2,000 species of edible and medicinal mushrooms in the world? Considering we can find only a dozen or so kinds at the supermarket, it makes you wonder: what else is out there? The good news is, it’s totally within your power to find out — by foraging!

If you’ve never considered foraging, it’s time you get acquainted. After all, gathering and harvesting food in the wild was part of human daily life for millions of years! Not only will foraging put tasty mushrooms on the table, but it will put you in nature, and allow you to get some exercise while you’re collecting ingredients for dinner. In short, foraging mushrooms is an activity you can learn to love, even if you’re still not convinced that you love the taste of mushrooms themselves.

Want to give it a shot? Here are a few simple tips to follow when you’re a newbie:

Where to Go and What to Bring 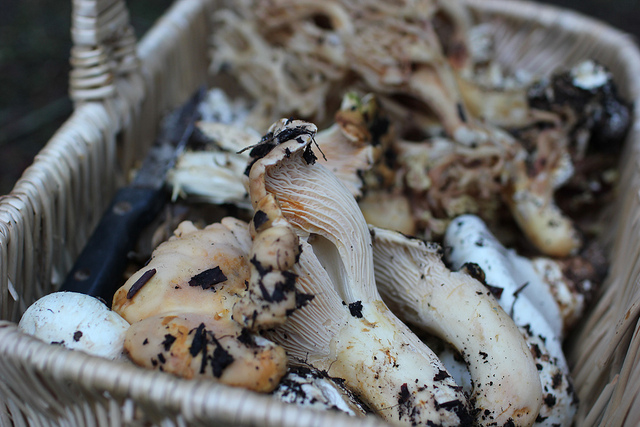 Although mushrooms can be found in similar places all over the world (such as forests and grassy areas), the varieties you will find differ greatly depending on your specific location. Thus, it’s a good idea to get to know your local mushroom foraging experts. Not only will they point you in the right direction to find the tastiest fungi but they will also show you the ropes.

The presence of knowledgeable foragers or having a thorough guide is crucial in your first outings. Many popular mushrooms have poisonous and deadly look-alikes, so learning to properly decipher their differences is essential, to say the least.

Once you have found your crew, arm yourself with two baskets, a pocket knife, and a hand mirror. One basket can be used for the mushrooms you have identified with certainty and the other is for those attached with a big question mark. Your mirror is useful for looking at details from every angle in those troublesome mushrooms.

If you want more tips on what to do during your first foraging session, check out Dos and Don’ts of Food Foraging – and Living to Tell the Tale.

Learn to Avoid These Poisonous Mushrooms

There are more than thousands of cases of people getting poisoned by mushrooms in the U.S. each year, mostly due to wrongly consuming look-alike poisonous versions of edible fungi. Always err on the side of caution if you’re unsure of what you find. Here are a few of the most usual poisonous mushrooms: 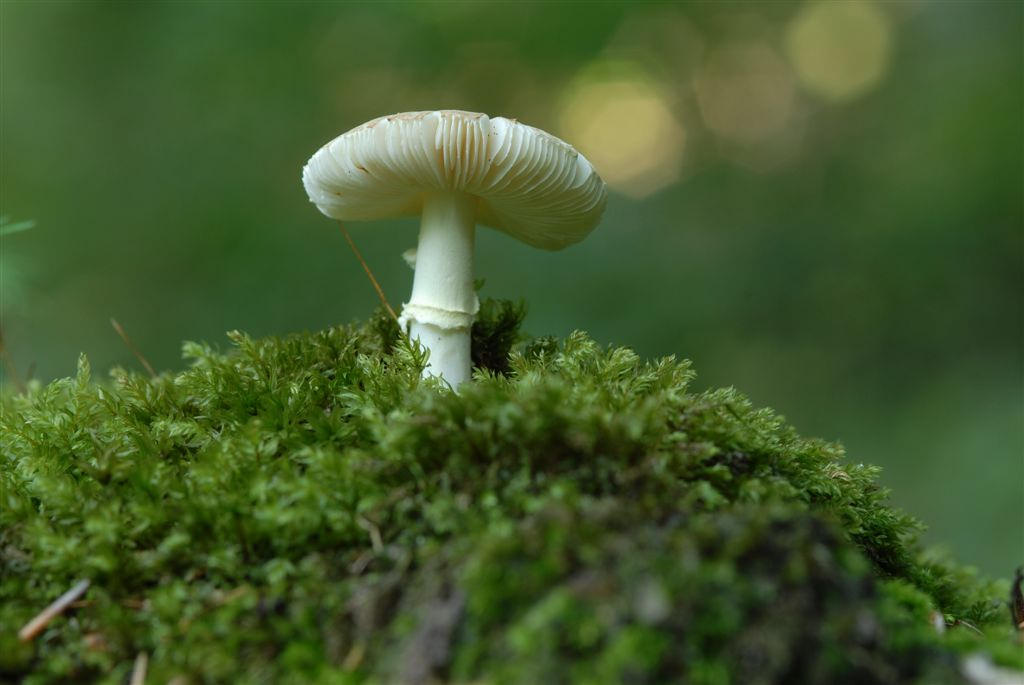 This mushroom is one of the deadliest poisons found in nature. They are usually found on the ground in woodland areas during the summer and fall season.

As a rule of thumb, avoid all mushrooms with a parasol shape and white gills. 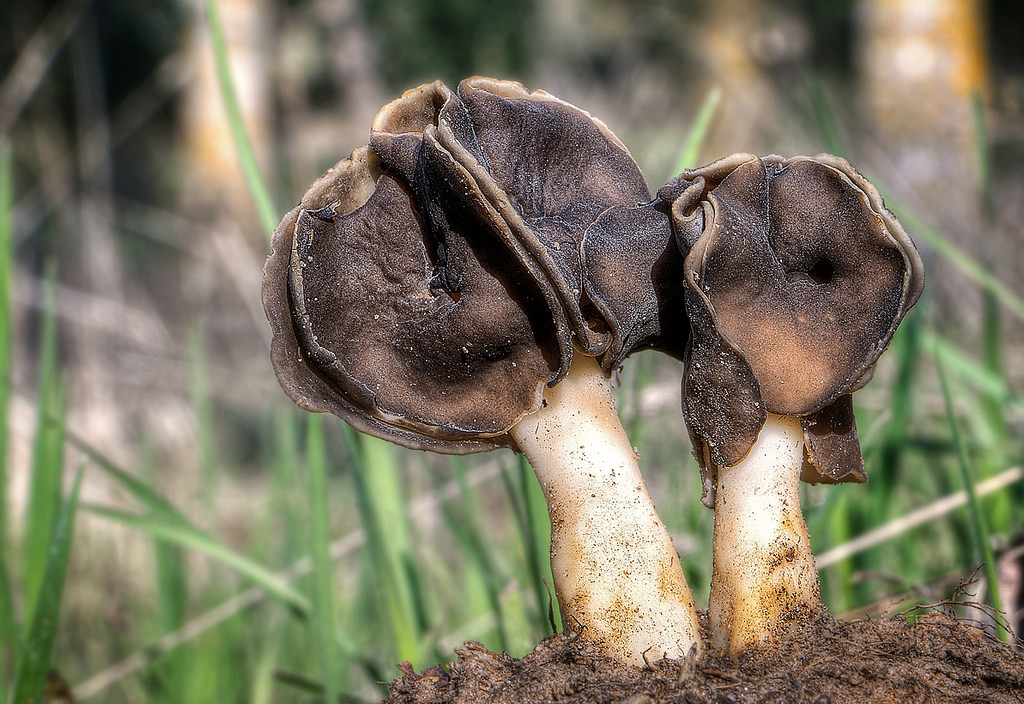 False Morels are a dangerous look-alike of the tasty and edible real Morel mushrooms. They’re found all through summer and autumn in woodland areas. False Morels can be recognized by their wrinkled cap, whereas the real thing will look more like a honeycomb. If you’re guilty of confusing a false Morel for a real one, be prepared to suffer as these are toxic to your liver, and will give you unpleasant symptoms such as nausea, diarrhea, vomiting, and dizziness. 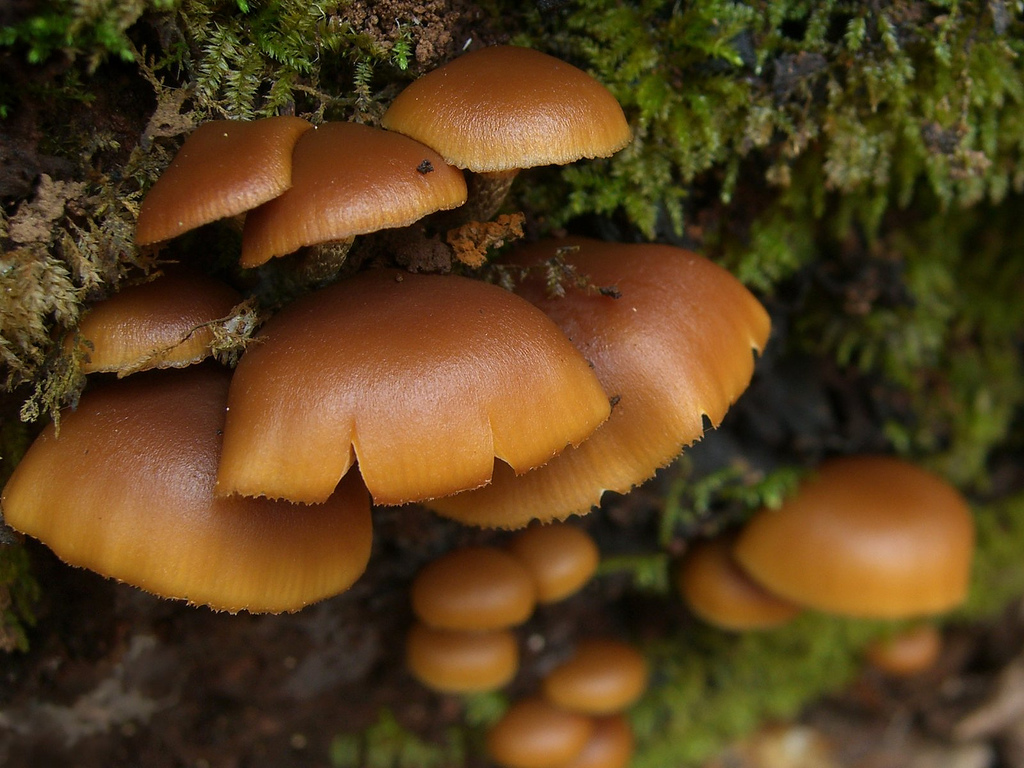 Little Brown mushrooms are an umbrella term for all the hard-to-identify mushrooms that fit into this category. Some are harmless, some are poisonous and hallucinogenic, and a few are actually deadly. The Galerina mushroom (which is the deadliest of the little brown mushrooms) grows on wood from spring to fall. You will recognize it by its brownish spores and the way it clusters. 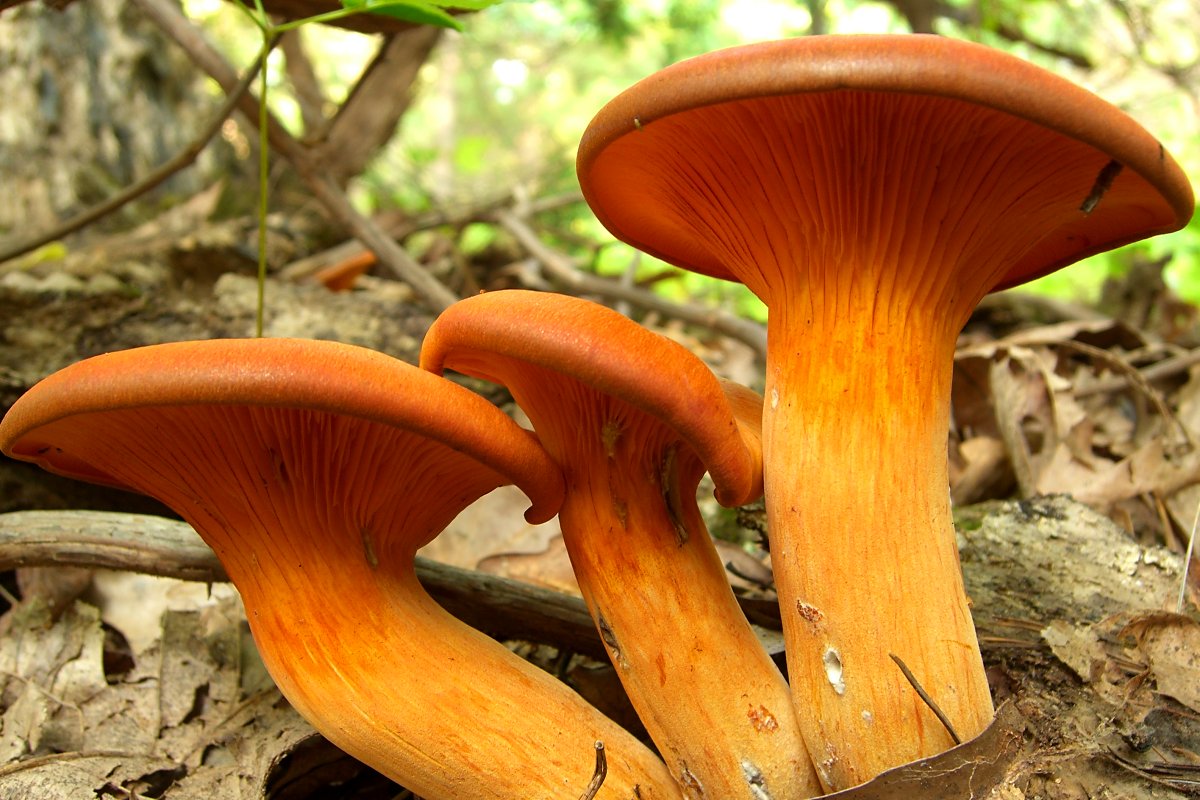 This mushroom is often mistaken for Chanterelles because of their similar appearance and taste (they’re both fruity), but the Jack-o-Lantern can give you a severe upset stomach. While not life-threatening for a grown-adult, consuming it is still ill-advised. These mushrooms are found at the base of trees and stumps where they grow in large clusters from June all through fall. 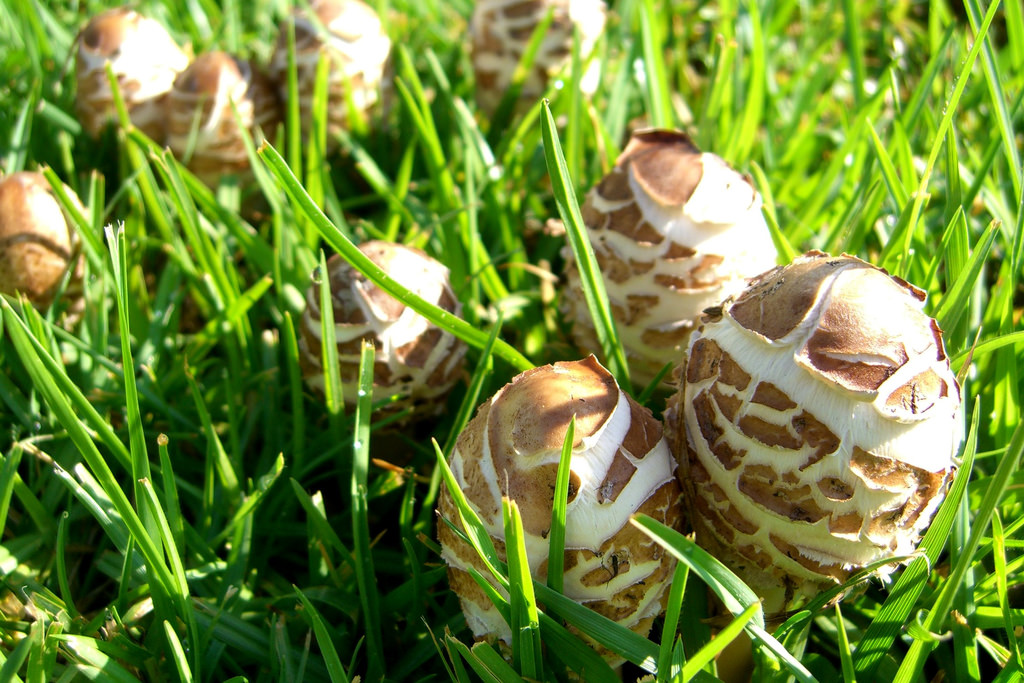 This mushroom grows on lawns and meadows in the summer and fall. Although consuming them doesn’t cause death, they will give you severe gastrointestinal upset.

Edible Mushrooms You Can Expect to Find

Here are some of the tastiest and easiest to find edible mushrooms: 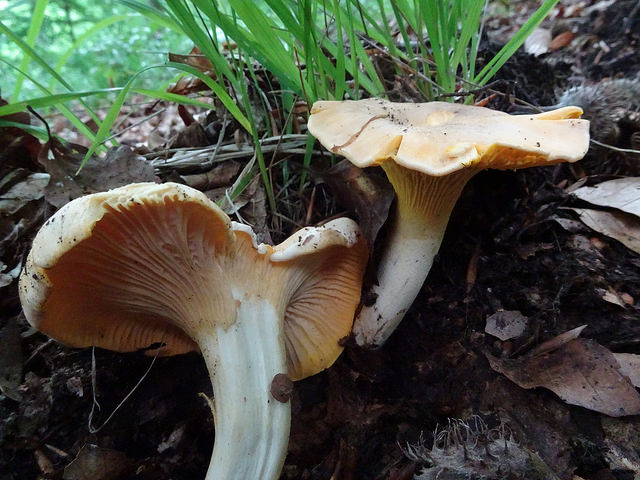 This mushroom’s exotic sounding name is appropriate, considering it’s a total delicacy. Its taste will remind you of citrus or apricots. Chanterelle mushrooms can be found on hardwoods, conifers, and shrubs where they grow in small clusters. Be aware that Chanterelles have a toxic look-alike: the Jack-o-Lantern. 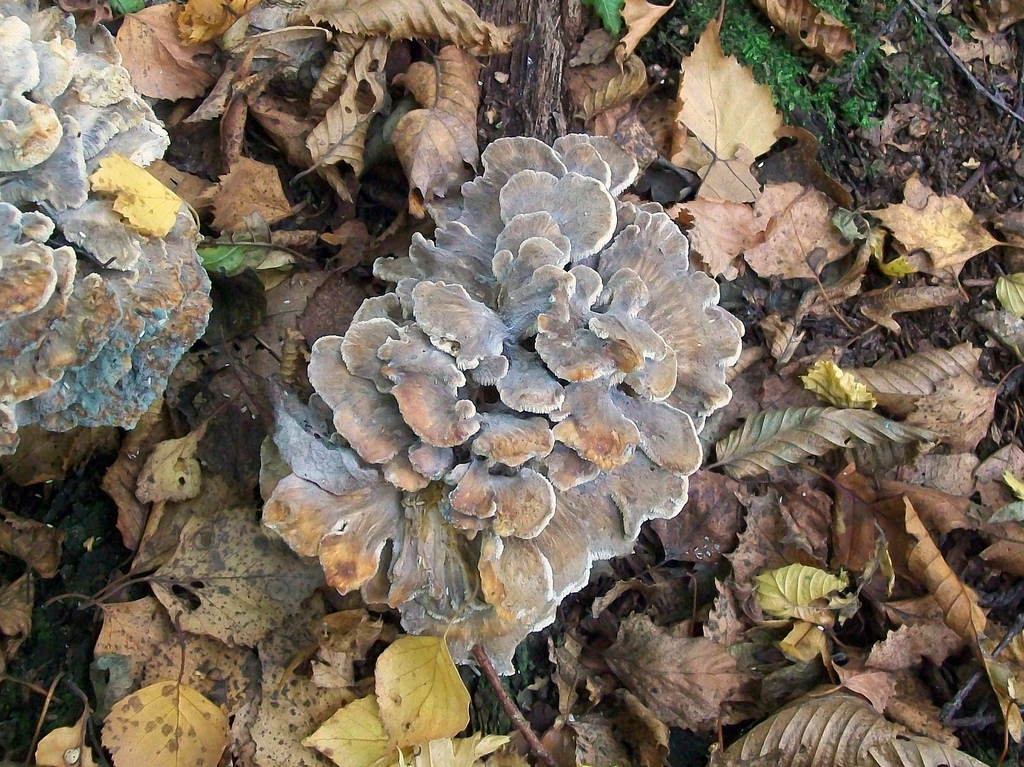 This mushroom grows at the base of oaks trees primarily and you can find it during fall in the East of the US. It’s a good variety for beginners to forage because they do not have any toxic lookalike. 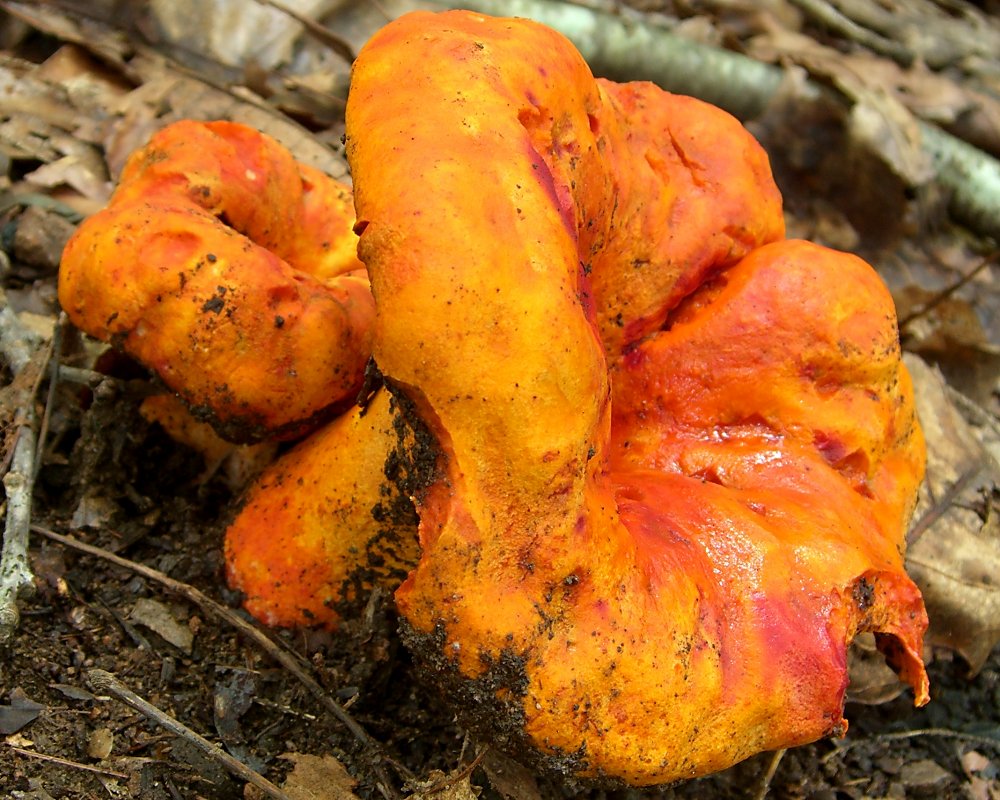 As their name suggests, these mushrooms have a very seafood-like taste. You can usually find them at the edges of forests where they grow on coniferous and birch trees. They’re especially great in cream sauces, soups, and as a meaty substitute because of their firm flesh.

Try making this delicious Lobster Mushroom Bisque or this Savory Mushroom Gravy with your foraged lobster mushrooms. You won’t regret it! 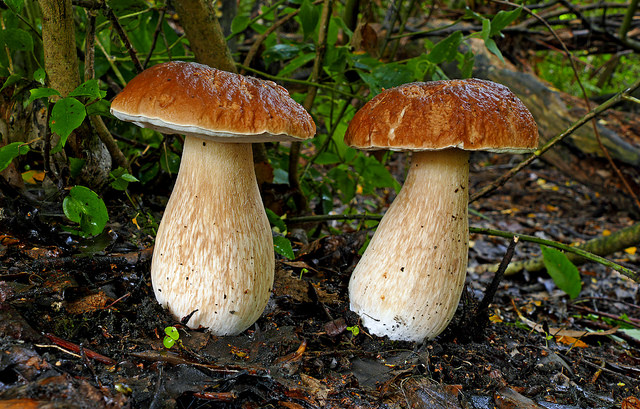 These mushrooms, which are also referred to as Porcini, can be found under conifers and deciduous trees from June to October in the East, or late fall through winter in California. They typically attract insects, so be aware of that when you pick them.

Try Porcini mushrooms in this Potatoes and Porcini Mushroom Ravioli in Broccoli Cream Sauce or this Buttery Porcini Mushrooms and Asparagus on Toast. They’re also great in soup dishes like this French Onion Soup. 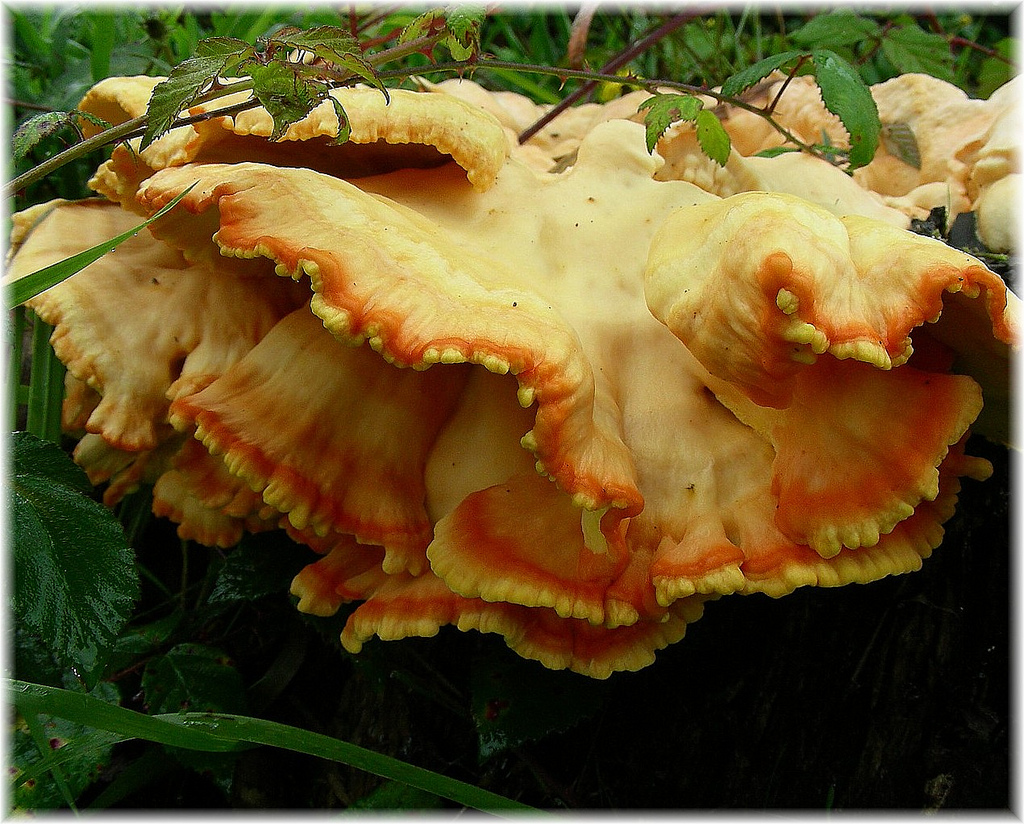 These mushrooms grow in all kinds of woods but you’ll mostly find them on oak live trees or logs. They are usually present during summer and fall all over the U.S.

This mushroom owes its name to its flavor, which is actually reminiscent of chicken. As such, it is best used as a chicken substitute in recipes. Try it in lieu of tofu in this Ultimate Teriyaki Stir-Fry, or in these amazing Mushroom and Garlic Tacos. Either way, you’ve got a winner on your hands.

How to Harvest and Care for the Mushrooms You Find 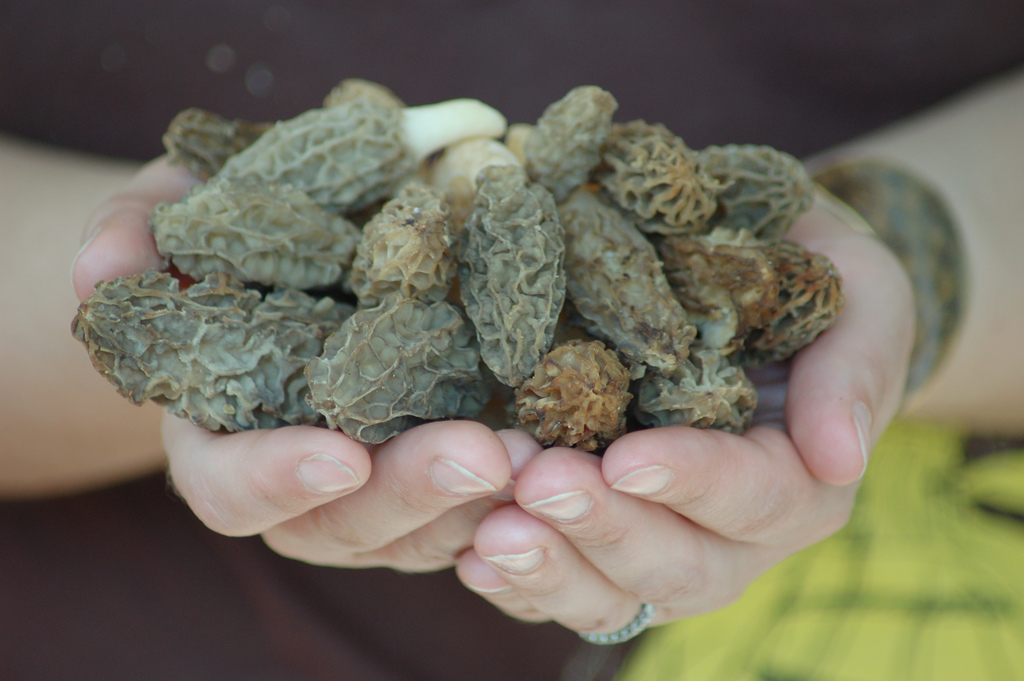 When you find a mushroom, you can either cut it by the stem or gently ease it out of the ground. The latter option may be the best way to go for mushrooms varieties that have long stems buried in the soil. Always harvest the fungi when they’re at their freshest and try to take only what you do plan on using (fungi are an essential part of the ecosystem).

The most efficient way to store mushrooms is in a brown paper bag because moisture makes them spoil quicker. It’s best to enjoy mushrooms 2-3 days after harvesting but most varieties can keep up to a week. 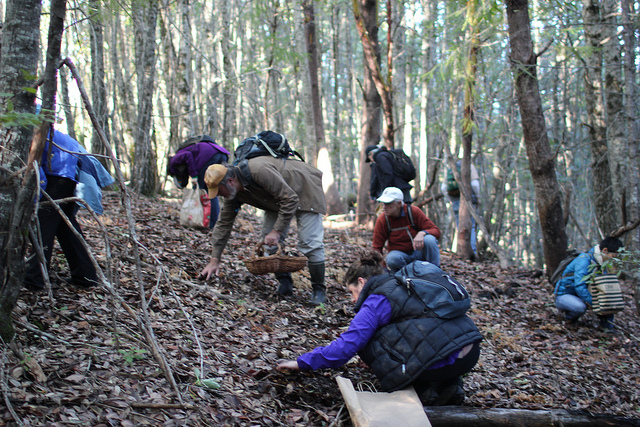 Remember, foraging for mushrooms can be a fun and safe activity, but in order for it to be so, appropriate guidance and patience is needed.  Being too eager can lead you to misidentify mushrooms because you will see what you want to see instead of what’s really there. That can bring some very unpleasant (and possibly deadly!) consequences. When in doubt, always refer to credible sources and put your trust in experts. It’s also good to polish off your earth skills knowledge if you’re not used to being in the woods.

That said, don’t be afraid to get out into the wild and reconnect with the earth because in the end mushrooms are just a bonus!

Recommended Resources and Recipes to Get You Started 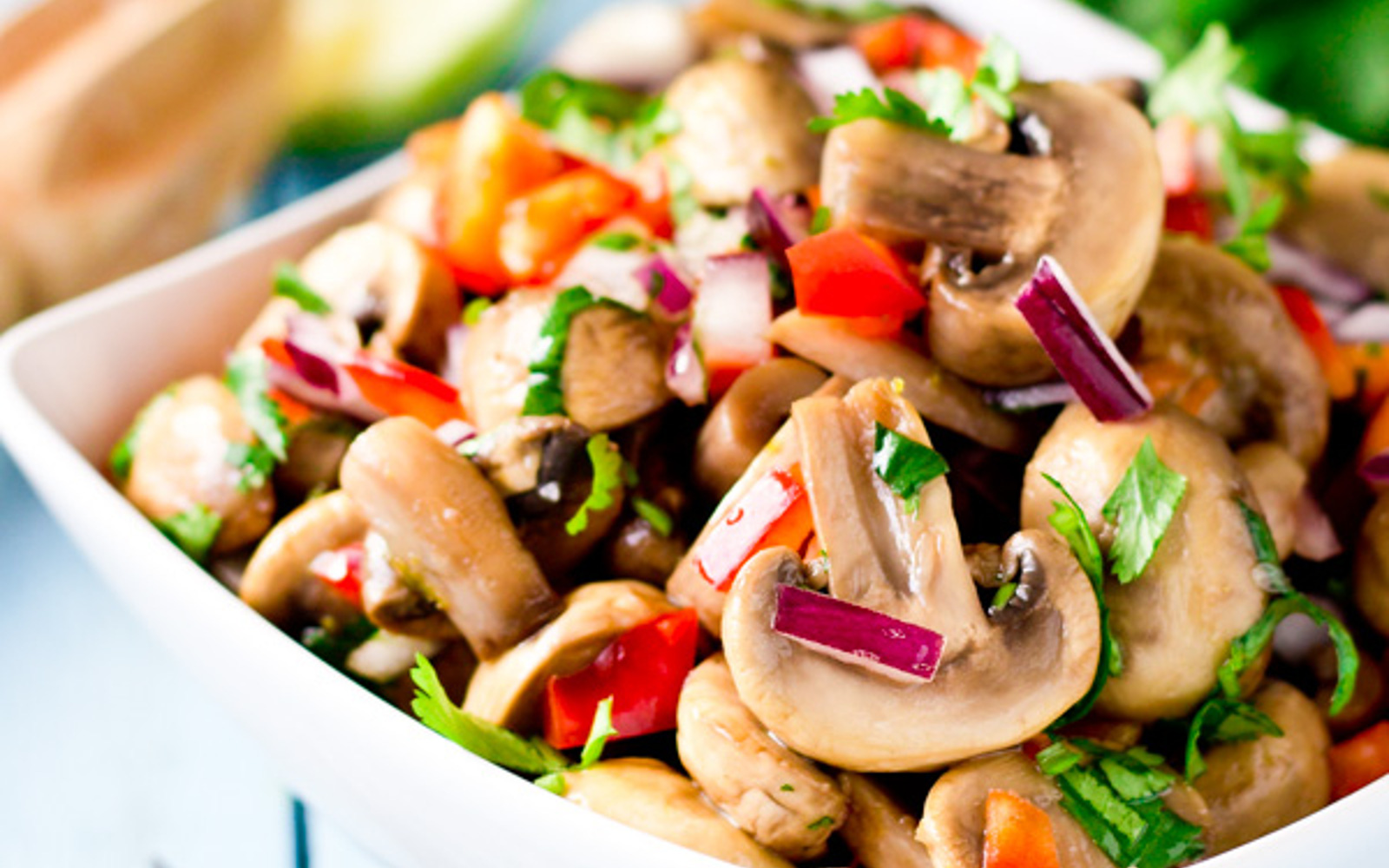 Want to find more information about mushrooms and delicious recipes? Here are a few articles that might interest you:

If you enjoy articles like this and want to find recipes featuring mushrooms and other wild vegetables, we highly recommend downloading the Food Monster App. For those that don’t have it, it’s a brilliant food app available for both Android and iPhone and can also be found on Instagram and Facebook. It’s a great resource for anyone looking to eat healthier, cut out or reduce allergens like meat, dairy, soy, gluten, eggs, grains, and find more awesome recipes, cooking tips, articles, product recommendations and how-tos. The app shows you how having diet/health/food preferences can be full of delicious abundance rather than restrictions.

The Food Monster app has over 8000+ recipes and 500 are free. To access the rest, you have to pay a subscription fee but it’s totally worth it because not only do you get instant access to 8000+ recipes, you get 10 NEW recipes every day! You can also make meal plans, add bookmarks, read feature stories, and browse recipes across hundreds of categories like diet, cuisine, meal type, occasion, ingredient, popular, seasonal, and so much more!